On Tuesday, July 17 we headed south from Juneau down Gastineau Channel and into Stephens Passage.  Our destinations this week include Taku, Endicott Arm, Dawes Glacier, Fords Terror, Windfall Harbor, the Pack Creek Bears and Petersburg. 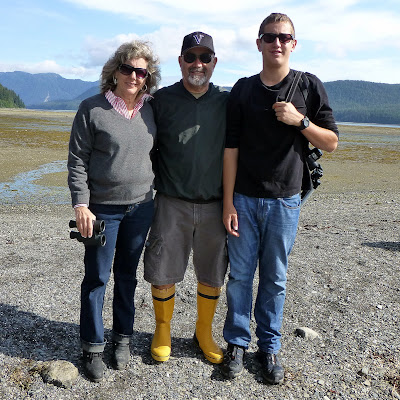 Our guest crew this week are Wild Blue veterans Jan, Jerry and Justin Watkins of Simi Valley, California.  This is their fifth cruise with us.

Once in Stephens Passage we noticed scores of commercial gill-net fishing boats along the east coastline. Gil-netters run a 3/8 mile long "curtain net" perpendicular to the shore. The net has larger openings so as fish swim by, the smaller fish pass through the net, but the bigger ones get caught. After a couple hours, the net is reeled aboard and the large salmon are plucked.

Seeing all this fish, we decided to troll our our way along. We dragged herring and lures with flashers at various depths from 30 to 100 feet, but these fish just weren't biting, however they were busy getting caught up in nets!

That night we moored at the public dock in Taku Harbor on the east coast of Stephens Passage. We set two crab traps among the 4 dozen or so commercial traps and hoped for the best. Once the commercial crab season opens in mid-June, the crabs get scarce. 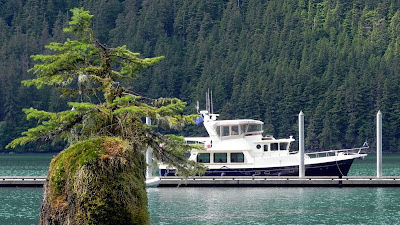 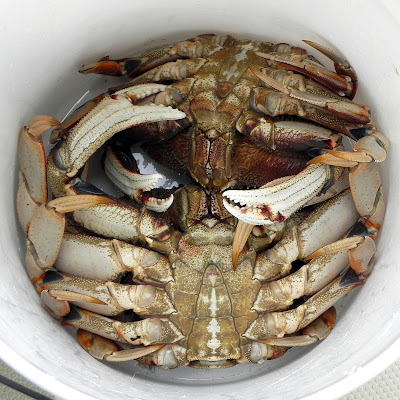 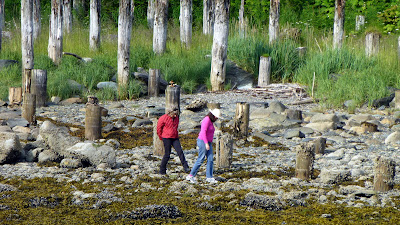 As we departed Juneau, a cruise ship came close to knocking us off course, but we held our own (NOT).


On Wednesday we pulled out two legal male crabs, cleaned and cooked them, then continued south down Stephens Passage with light winds and little rain.  We trolled Port Snettisham entrance without success and continued toward Tracy Arm Cove.  Just before the left turn to Tracy Arm we noticed a nice looking anchorage under Point Coke.  In the calm seas and winds the "cove" looked good so we dropped the anchor and a couple of fishing lines too.  After a while, Jerry hooked a good sized fish which once landed turned out to be a 40 pound halibut.

Later our cove got bumpy from passing cruise ships, so in the later evening we moved around the corner to Tracy Arm Cove anchoring with 8 other vessels. 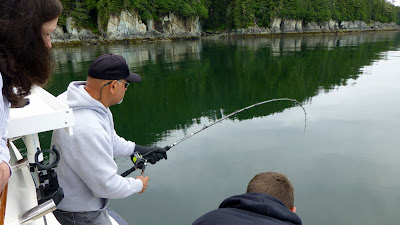 Jerry hooks a big one. 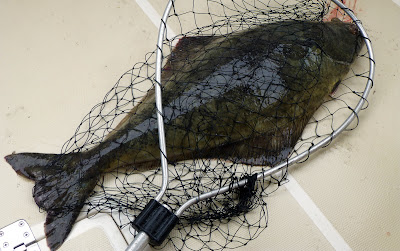 Just fits in the net. 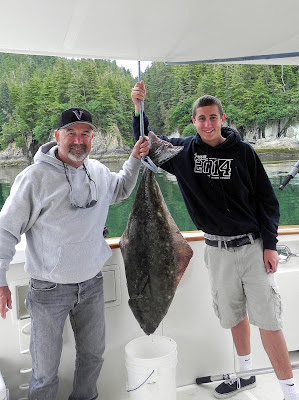 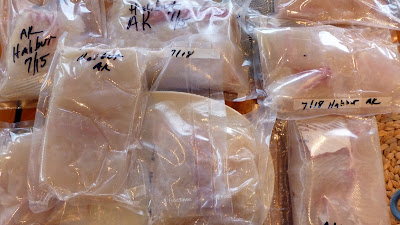 Halibut is quickly packaged and frozen. 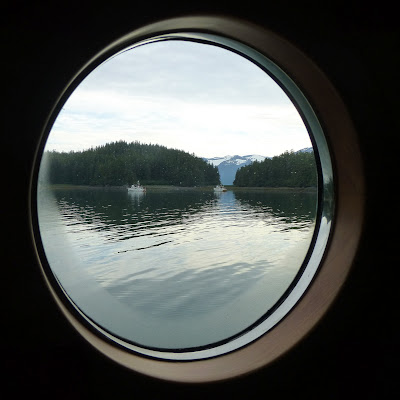 The view from Tracy Arm Cove.

On Thursday we started early up Endicott Arm for Dawes Glacier.  It was a 4-hour journey to the glacier face.  We dodged giant, large, medium and small ice bergs and lots of little "bergie bits".  The face was interesting but stayed back about 1/4 mile.  When the glacier calves, a large wave can be generated which reverberates for several minutes around the small confines in front of the face.  We noted and photoed several seal families on the medium sized bergs. We collected glacier ice and filled our big cooler.  Glacier ice is dense and seems to stay cold longer.  We enjoyed that glacier tradition 15 over 15,000 -- whiskey aged 15 years, over 15,000 year old ice.

At 2PM we motored near the entrance to Fords Terror and examined the rapids while waiting for slack water.  Anytime other than slack water these rapids run fast and wild.  They limit access much like a time controlled bank safe.  Ford Terror resembles Yosemite with its high granite walls, waterfalls, green glacier water and lush summer vegetation. By 2:45, some 40 minutes after high tide in Juneau, we followed a couple kayaks through the shallow entrance into this pretty  other world.  It was raining and we set a couple prawn traps in 300 feet.  We anchored in the northern arm in front of a picturesque waterfall and outflow that keep us near motionless. 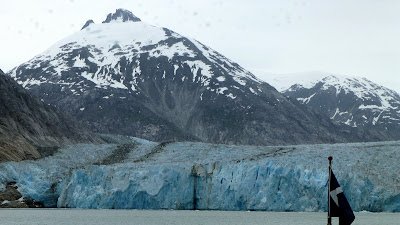 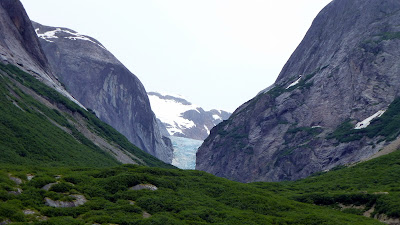 This old glacier has receded from the shore, leaving a nice cut in the granite. 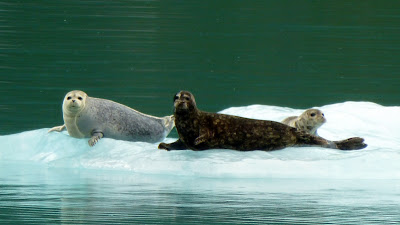 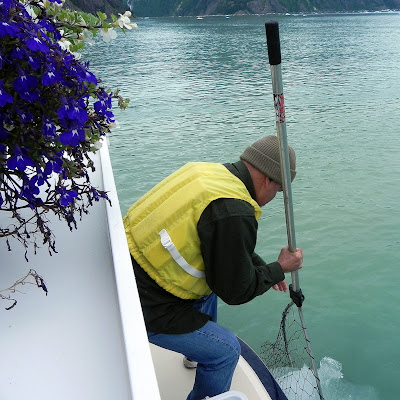 Harvesting glacier ice for the toast. 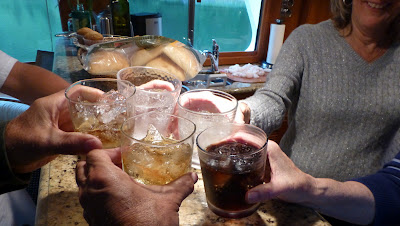 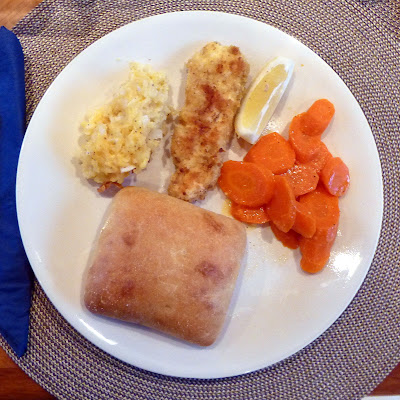 Seals and their young ones on an ice berg island.  The killer whales don't travel up to the glacier so the seal moms have learned to raise kids here.

Entering Fords Terror.  It was more exciting exiting at 3AM!


As pretty as it was, the crew could not see spending a full day inside Fords Terror in the dreary dark weather.  Like the timed bank safe, you can only exit at high slack tide, or once each 12 hours or so.  That meant tomorrow at 3PM the next "daylight" high tide.  We thought some more and decided we could exit at the 3AM slack high, except it would be dark.  But would it?  Nights in summer Alaska aren't really that deep black dark. We pulled our prawn traps just in case we decided to leave in the early morning darkness and counted about 3 dozen worth....just enough for prawns in linguine.

At 2AM Friday, we awoke after a 3 hour nap, pulled anchor and headed for the entrance. With Jerry and Pat on the bow watching for ice and dead trees we creeped forward making the entrance a bit late.  The tidal current had already reversed and began pushing us at 3 knots.  We rode this push out the entrance landing in a bunch of small ice bergs which were easy to see.  We were on our way to Windfall Harbor in Sandborn Canal, and the Pack Creek bear observation facility.

After a 9-hour motor we dropped the hook at Windfall.  The sun was shining, the wind abated, and the water was glassy.  Just right for a ....nap. 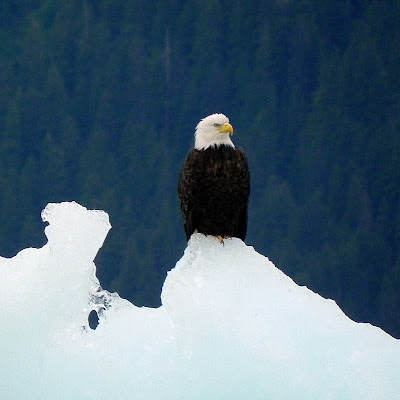 Eagle over ice:  No this is not a new cocktail. 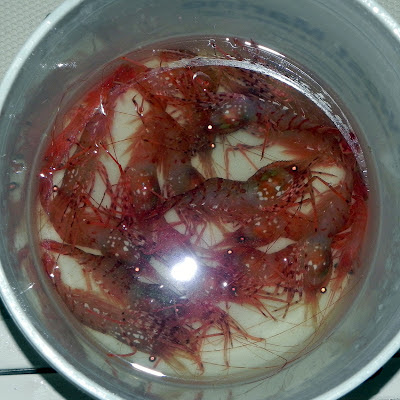 Lots of prawns in Fords terror. 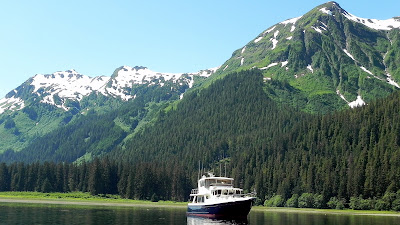 Windfall harbor lives up to its name. 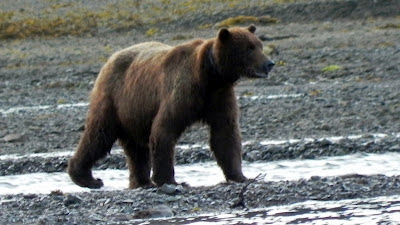 We spent the rest of Friday lounging and prepping for the Pack Creek visit the next day.  Prawns, garlic, olive oil, tomatoes and linguine put us to sleep again in that evening.

On Saturday we drove the tender towards the designated unload area at Pack Creek and were intercepted by three Forest Rangers who briefed us before we became bear food. We landed with them and their armor of rifles and pepper spray.  The water is shallow and the tides vary some 20 feet between low and high.  So the tender was tethered to a pulley system and cranked out to deep water, so it wouldn't be high and dry when we chose to leave.  The bears didn't bother us.  In fact the mink wasn't bothered by us either, going for a swim just a few feet away and returning with a nice sized crab for his breakfast.

After a safety briefing, we followed our guide to the estuary viewing area.  After an hour or so, three bears showed up and displayed their fishing prowess. One 17-year old sow had a GPS collar that's been installed by the Forest Service for monitoring her location.  Later that afternoon we trekked a mile inland to an observation platform above the Creek.  There we were able to get close to the bears and record some interesting video. 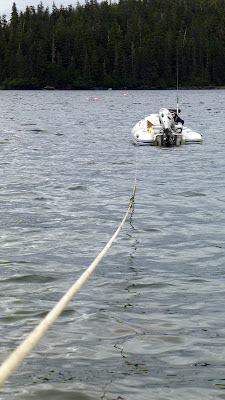 Our tender is pulled offshore in deeper water. 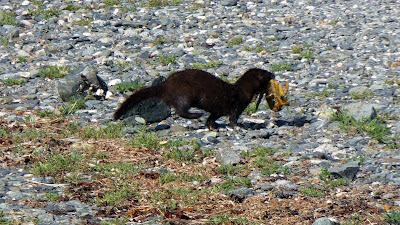 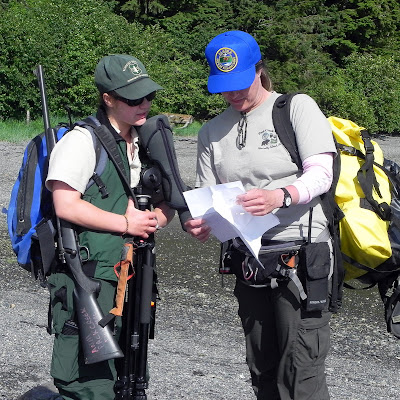 Our Rangers were armed and ready for unruly Grizzlies. 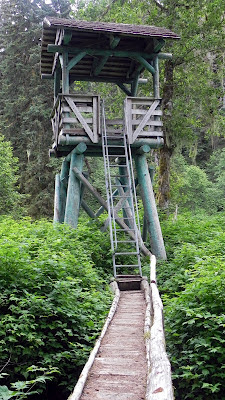 Observation platform 1-mile deep in the wilderness along side Pack Creek.


Bear tastes one salmon then takes another.


Active "collared" bear stomps on salmon for his dinner.


On Saturday afternoon we left Windfall for Mole Harbor, about 10 miles south in the Sandborn canal to get us closer to the next day's destination.  There Jerry landed a second halibut. 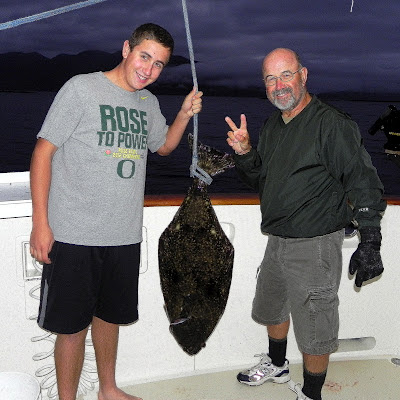 Yes we know Oregon won the Rose Bowl, but that "V" is not for victory, or peace.  This was Jerry's 2nd halibut.

On Sunday we set course for Petersburg and the end of a great week of cruising in AK.  On Friday our son Ryan and his fiance Cailin arrive for 10 days of fun in Alaska. 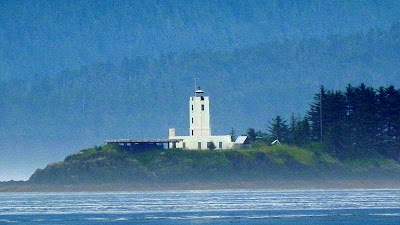 Five Fingers Lighthouse is the last manned lighthouse in Alaska. 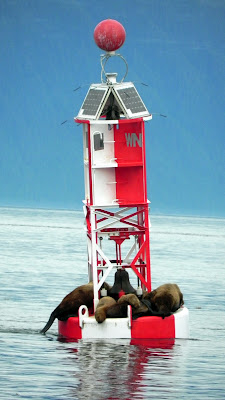 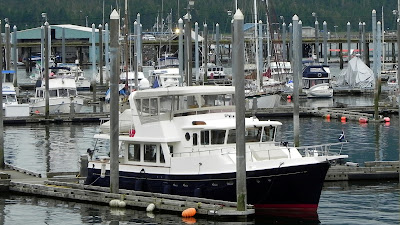 On the dock in Petersburg.