On Sunday, June 24 Alex's college roommates arrived in Sitka. Willie, Joe, Mike and Alex all graduated from Cal Poly San Luis Obispo in 1970-71.  Willie Benedetti was a poultry major and now operates his own poultry business. Willie-Bird Turkeys in Northern California is just one of just four remaining independent turkey producers in California.  Willie-Bird started as a high school FFA project.  These days Willie's turkey's are distributed world-wide each Thanksgiving and Christmas by Williams-Sonoma.

Joe Cebe, also a Cal Poly poultry graduate, operates Cebe Farms in San Diego County, a large six-ranch chicken operation.  Joe developed a unique strain of bronze chicken which has become quite popular in the Spanish and Asian cultures.  He ships his birds live to poultry markets throughout California.

Mike Celentano operates a CPA practice that specializes in Audits.  His practice is located in Northern California.  Of course Willie-Bird is one of his many clients.

As usual, Willie arrived in Sitka with a packed cooler: eighty pounds of fresh food including prawns, duck, Louisiana sausage, turkey bacon, smoked chicken, turkey steaks, and salad shrimp.  Looks like Alex will be putting his vegetarian diet on hold this week.

On Monday we began fishing the Sitka area for King Salmon. Alex had consulted the locals and built on his experience fishing the previous week aboard Spirit with the Gills. The best local fishing spots and fishing gear were recorded. On the lee side of Biorka Island we landed 3 Kings during the morning hours then spent the rest of the day trying for the 4th. Current 2012 Alaska regulations annual limit to 4 Kings per non-resident fisherman and one-fish per day per angler. Most of the time salmon trolling is hours-and-hours of boredom, interrupted with few minutes of extreme excitement. Such was Monday's fishing. 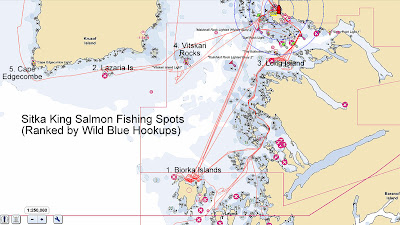 Gear wise we are now using the longer, flexible trolling polls cranked down hard against the down-rigger weight. We find it much easier than shorter polls to detect and distinguish hits, as opposed to shakers, flasher wraps, weed, etc.  The Shimano Charter Special reel is quite popular on other sports-fishers and we like the ease of adjusting break tension while reeling.  We use hand crank Cannon down-riggers with 12 pound balls with trailing fin.  The big Scotty, clips which are quite easy to use, attach line to down-rigger at the ball fin.  We leave about 15 to 20 feet of line behind the ball.  A green center-striped "e-chip" flasher has proven the best for us and others.  We have only fished with frozen herring, clipped at the nose, with one hook through the body, and a second dangling hook.  This has proven to be the best setup for us. 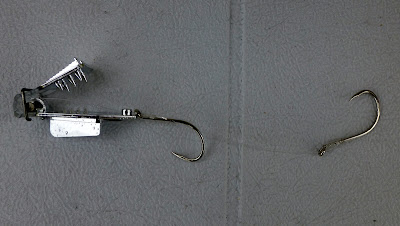 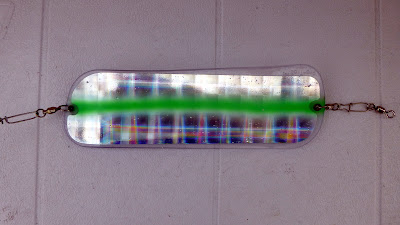 After trying various flashers, this particular "e-chip" flasher has proven quite successful for us and the Spirit crew.

On Tuesday we again awoke at 4:30AM and by 6:30 were back at Biorka Island tolling along with 20 other boats.   But Biorka turned against us and the bite was off.  After 9 hours of boredom, dragging lines without a hookup, we retired back to the harbor.

Willie put together a wonderful Louisiana style salmon-prawn gumbo.  Miriam and Patrick from Spirit joined us.  Served in real Abalone shell bowls, fabricated by Willie's son Arthur, the gumbo was excellent.  It was accompanied by shrimp salad and BBQ duck breast. 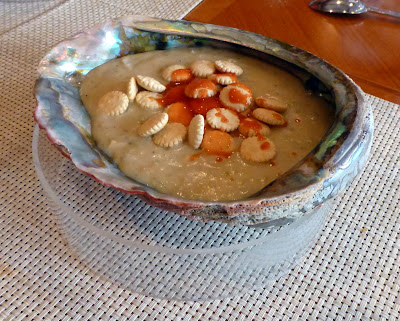 On Wednesday we left Sitka early headed for Vitskari Rocks.  The bite was immediately on and we landed one and lost one in 15 minutes.  After just an hour, we headed north for Kalinin Bay at the top of Kruzof Island.  At St John Baptist Bay we set two crab traps, watched a grizzly bear forage along the shore, and then began trolling near Kalinin.  After 4 hours of no bite, we moved outside to a point just below Seal Lion rocks.  The bite was off for the rest of the day.  We returned to empty crab traps but enjoyed Willie's turkey spaghetti at anchor. 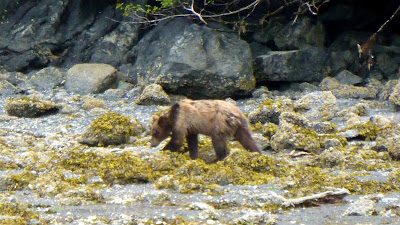 This hungry grizzly can't wait for the berries to ripen and salmon to run.

On Thursday we were behind the curve on landing our annual limit of 4 King salmon before the licenses expired on Sunday.  We headed out to Sea lion rock and immediately landed a good sized King.  After a quiet hour we began fishing our way down the ocean side of Kruzof Island.  We landed a couple good sized Silver salmon.  After fishing the outside for most of the day we rounded Cape Edgecombe with still just a lonely King in the box.  The south westerly swell made trolling uncomfortable so we moved over behind Lazaria Island. Soon we landed two more Kings in the flat water in the lee of the Island.  We ended the day at Sitka Harbor with seven down, five to go.

On Friday after a midnight dinner of venison sausage, we dragged out of the sack early for another shot at Biorka Island.  Suddenly at 8:15AM the bite was ON!  By 8:45 we had landed 3 Kings, but lost another 5.  We had both lines with fish on but in our excitement suffered from broken lines, too tight brakes, broken leaders.


We were a little tough on Joe here.

It doesn't pay to pull too hard! 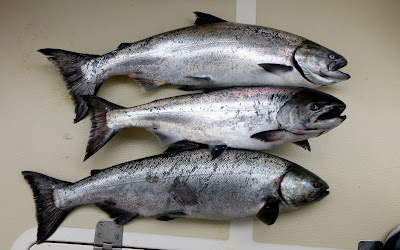 Three out of eight in 35 minutes! 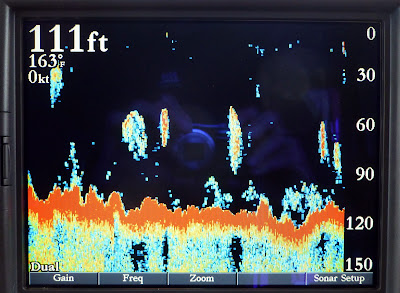 Willie Benedetti of Willie-Bird Turkeys is a pretty good fisherman. On July 1st, our last day of fishing, he landed a pretty good sized fish and Willie, Joe and Mike fulfilled their Alaska Non-resident season limit of 12 King salmon in 7 days. 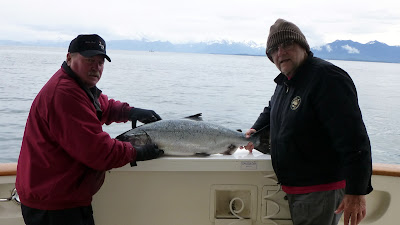 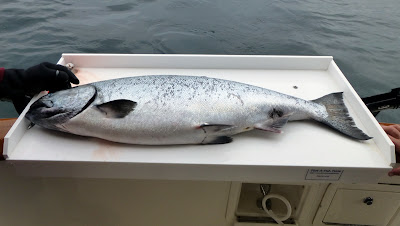 Willie lands the big one. 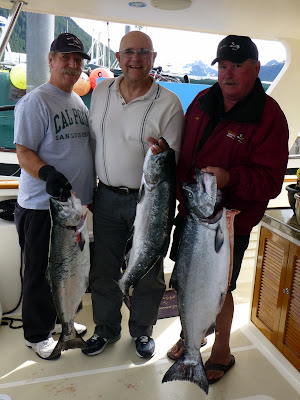 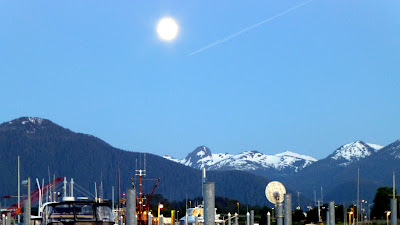