On Friday evening, August 24th, we borrowed the Fuel Dock van and picked up crew Dick Squire at Port Hardy airport.  Dick is the perfect crew having owned and operated some 40+ large boats through the years.  He and his crew aboard Seagate, an Offshore 54, accompanied the Wild Blue on our first Alaska Cruise in 2008.  We have crewed for each other many times over the years.

On Saturday, we got an early start in the dark hours of the morning in order to catch the flood tide down Johnstone Strait.  The wind was down and flat seas greeted us again.  We motored for 10 hours pushing against a 5-knot current at upper Rapids in Okisollo Channel before setting the hook in Octopus Islands. 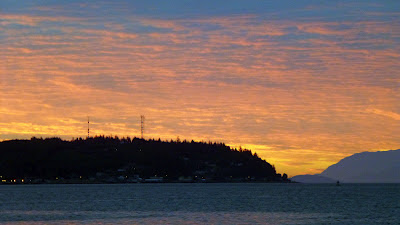 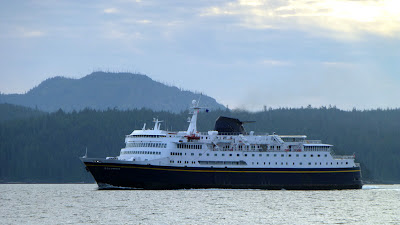 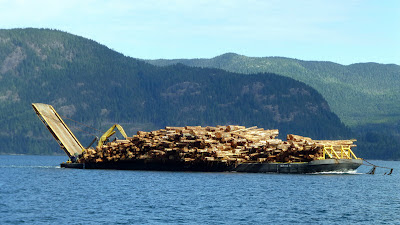 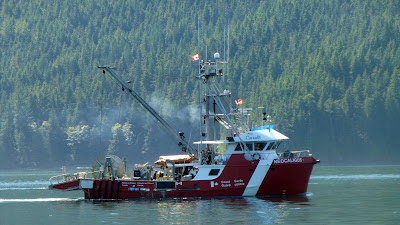 A unique Coast Guard fishing vessel?  So do they fish to feed the Canadian CG? 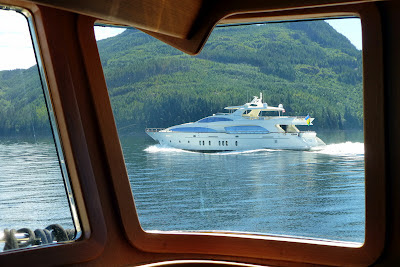 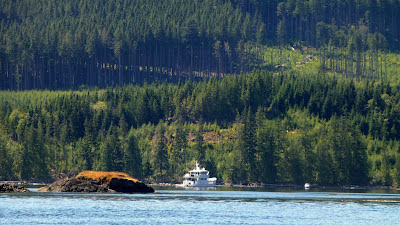 On Sunday we pushed hard again leaving at first light to make slack water at Surge Narrows.  Flat seas, calm winds and sunny skies are now filling these days, the opposite of the 2012 Alaska Summer.  After 8 hours we tied up at the Port of Pender Harbor docks.

On Monday we moved early yet again towards Vancouver's False Creek. Now the barometer had fallen and the wind was wound up a bit sending good-sized ocean chop directly at our course.  These waves crashed on the bow, slowing our progress and salting down the boat.  We eventually made Quayside Marina at 2PM.

On Tuesday in the dark morning hours we un-docked bound for the United States port of Anacortes, Washington.  Sunny skies and flat water continued for the day.  We entered Cap Sante Boat haven in Anacortes for US Customs inspection at 2PM.  The border agents were clearing passengers at the ferry terminal so we relaxed until they arrived at 4PM.  For once US Customs decided we weren't likely smugglers and didn't do an onboard inspection.  We continued on to Skyline Marina tying up at 5PM to end our 2012 Alaska Cruise.

It's been a great summer cruising with family and friends and we're already looking forward to a few winter cruises and the 2013 Alaska Cruise. 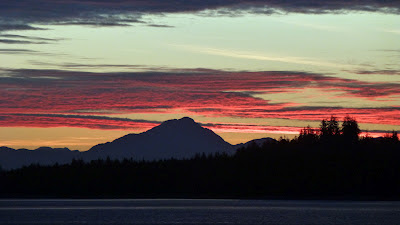 Normally we like to cruise with at least one crew.  In fact Alex likes a crowd aboard.  But there are times, due to unforeseen circumstances, crew is just not available. Such was the case Sunday, August 19th once Alex placed Admiral Pat on a flight home.  Once back aboard, it was time to shove off for points south to eventually round Cape Caution.  New crew arrives in Port McNeill on Friday, so Alex has a few days to make the rounding.

Just before departing, the Selene 53 Albannach arrived at Shearwater towing a sport-fisher tender.  The skipper was single-handing his boat and tender.  Once tied to the float Alex shared single-handing tips with the owner before casting off.

Namu seemed like a good target destination for today.  Once underway, Alex has a checklist of crew tasks to accomplish along with his captain duties; fender and line stowage first, then making lunch, and all while cruising by autopilot.  It was clear sailing around Denny Island into Fitz Hugh Sound.  The Sound was calm and Namu was easily fetched, but the Sound's water was so flat it seemed best to move down to Pruth Bay for it's wifi capabilities.  The boat was routed west of Nalau Island through Ward Channel then across Hakai Strait as a shortcut to Pruth Bay.  Upon arrival, the Bay was crowded with 16 at anchor, nevertheless Alex set the hook to surf the net.

After net fun, it became clear that the anchorage was just too crowded.  So with several hours of daylight remaining, Alex set a course for Safety Cove, just 90 minutes further down Calvert Island.  Safety Cove turned out to be too exposed to passing ships, so course was set to Pierce Bay.  Once there it too was filled so as a final destination, Little Frypan was it.  This nearly landlocked bay is bullet proof from storms so you would think it would be crowded.  It wasn't and Alex set the anchor in the dark with only a small Nordic Tug as companion.

On Monday, the 4AM weather was perfect for crossing the Queen Charlotte Sound and Strait.  At 6AM first light the Wild Blue was heading for the inshore route around Cape Caution in flat waters without wind.   The flat seas and calm winds held all day so after a 9-hour run Port McNeill was gained and the Fuel Dock Marina served as moorage for the next several days while waiting for crew to arrive.
Posted by Alex Benson, Wild Blue at 11:59 PM No comments: