Our destination this morning, after a 3.5-hour motor up the Gulf Of Alaska, is Lituya Bay. The route is 40 miles upwind, in normally large ocean seas, and you must arrive close to slack tide to navigate the narrow entrance to the Bay. It's remote and well off the typical routes of Southeast Alaska cruising boats. You have to really want to go to Lituya. So why would anyone want to visit? Lituya Bay is famous for two things: great fishing and the world's largest recorded tsunami.

To make it just a bit more difficult for us, we rise at 3AM after 5 hours sleep and quickly get underway in the dawn's early light, which in summer this far north is plenty. Slack tide at Lituya is 7AM. As we exit Dixon Harbor anchorage the ocean swell has diminished to the long-spaced, 3-foot variety and the ride is quite comfortable. Visibility is about a mile in hazy fog. Later the fog dissipates somewhat, but the gloom of low clouds blocks our view of the mountains and glaciers along the coastline. Lituya Bay and this coast is part of Glacier Bay National Park and there are supposed to be glaciers visible from the ocean, but not today. 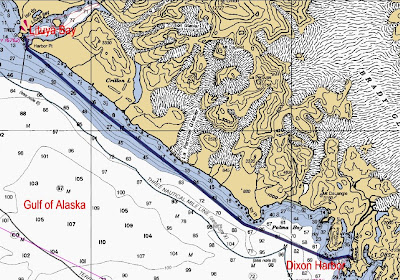 Our route from Dixon Harbor to Lituya Bay.
For 30 miles we see no other vessels, but note a cruise ship 40 miles out on the AIS. As we approach the Bay, the fog thickens again and we barely make out the entrance. Thanks to the modern GPS chartplotter, we are able to keep the boat in the narrow fairway. Even though the current is predicted to be slack, we detect almost 2 knots. The narrow and shallow opening cannot drain the 12 square mile Bay fast enough, so although tide is slack, the current continues to flow out for another 40 minutes, a significant point which we will note for our exit later this week. 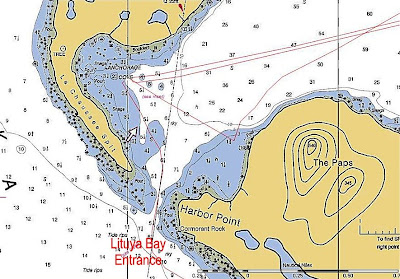 The skinny entrance to Lituya Bay can be tricky.
Once inside the Bay, all goes quiet and a near glassy, flat ocean surface prevails. The bay is about 2 miles wide and over six miles long. We anchor near the entrance for now but will move around to other Bay anchorages later.

We've been up early and are ready for a nap, but another shot of black coffee, Dick Squire style, wires us up for fishing. Lituya is famous for halibut, LARGE halibut and we're ready to test this claim. On last year's cruise, Bob and Gerard hooked a huge halibut at Fanshaw. It was a big, maybe 150 pounds, and there was no possibility, given the gear available, of landing the fish. This year the boys added a key element to their halibut campaign: a 6-foot long spear pole with detachable tip. We load the poles, bait and spear device into the tender, and head out to drift near the west end of Lituya Bay. Two poles are baited: one with cut herring chunks, the other with a medium-sized frozen herring. The third pole is rigged for bottom mooching with a white-colored lead-head hook and bright pink-red wiggly body. Our gear is dropped and all three of us settle in for the wait.

In short order it becomes quite clear what is needed to hook a halibut in Lituya: a pulse. Yes, you just need to be alive! Obviously when we dropped our gear, it bonked a big halibut on the head. It awoke, ignored the two baited lines, but swallowed Gerard's mooch jig. Wow what a kick! The 12-foot, 700-pound tender started moving around like a whale boat on the chase. Gerard fought the fish for 20 minutes when color finally showed. It's BIG and now comes our BIG decision. If we boat it, then our halibut fishing is over, as we will fill the freezer to the max.

After pledging to eat copious amounts of fresh halibut over 3 days, and assessing the available freezer space, we decided to take the fish. We tied a 30-feet piece of rope to the spear tip, and the other end to a cleat at the bow of the tender. Gerard deftly guided the fish into spearing range, and Alex took the shot! Zap! The fish was stabbed clean through leaving the spear tip on its far side. The water turned red with blood and the fish took us for a short ride. Within a few minutes the big guy gave up, yet we netted him for insurance, then dragged him over to Wild Blue, for processing. We'd been in Lituya Bay for 3 hours and had already boated a big one. 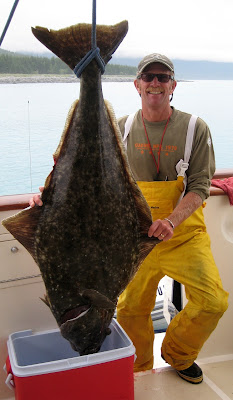 Gerard's BIG fish was 59 inches and 103 pounds.
At 103 pounds, this halibut surpasses the Wild Blue 87-pound record set by Vince Fonte last year. When contacted by The Alaska Blog about his record falling, Mr. Fonte stated "Aw, that fisherman must have been a professional." 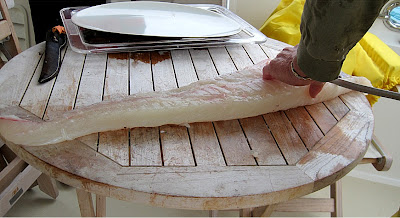 About 77 pounds of meat are harvested from this fish in the form of 1.5-inch steak-cut fillets. 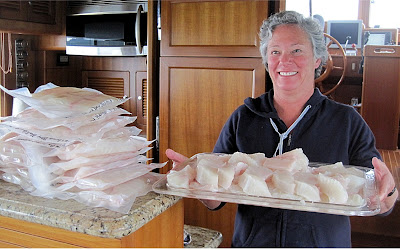 Tina is dreaming about dinner, and how to store 77 pounds of fish into the freezer.
While the crew was hard at work processing the fish, the skipper was noting the volume of fish guts being cast overboard. It seems other fish might be attracted to the boat, so Alex started lazy-mooching off the stern. Lazy-mooching entails paying attention to anything else except fishing, while slowly lifting and lowering the pole. It's extremely poor form to appear interested in fishing. You should never look at the pole, and if you get a hookup, don't let that interrupt a good conversation. It's best to lazy-mooch while seated, with your favorite alcoholic beverage. The lazy-moocher's motto: "We only need a pulse to fish."

Within minutes a fish was hooked, and after 10 minutes, the fish was on the surface. Since the fish processing crew refused to clean another, and the freezer was full, we decided to “free Willie”, but not after measuring him. 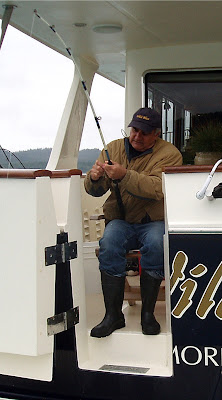 Hey, even a blind squirrel finds a nut sometimes, especially in Lituya Bay. 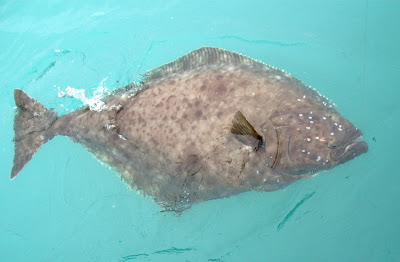 Alex's halibut does a “swim by” for the photographers. 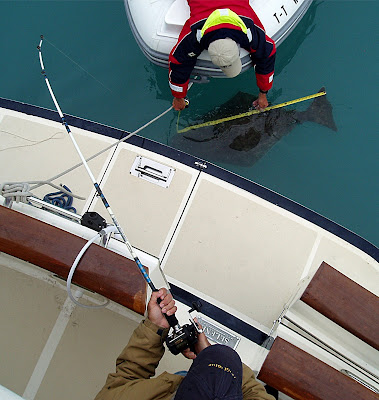 Architect and General Contractor Bob always has a tape measure handy. He says the fish is 50+ inches long, but not a record.
We pulled anchor and set our prawn and crab traps to soak for the night. We moved the boat near the traps and anchored on the west side of Centograph Island, located about halfway down the bay. We think this anchor site is prudent as the boat and crew anchored here, on that fateful morning in July 1958 survived, when the 1200-foot tsunami rolled through. More on that tomorrow after we catch some much-needed zzz's.
Posted by Alex Benson, Wild Blue at 10:43 PM