"Securite! Securite! This is the 60-foot motor vessel Wild Blue, inbound at Malibu Rapids. Any concerned traffic please respond." Alex chuckles this message over the VHF radio, laughing, as most likely his radio call goes unheard. The courtesy call normally alerts boat traffic when transiting the busy rapids into Princess Louisa Inlet, however, except for a BC ferry, we haven't seen another boat all day. It's snowing on a January winters day in Jervis Inlet, British Columbia. Wild Blue left in the early morning darkness to arrive at the Rapids near slack tidal current, we're about 30 minutes late, and close to our destination, Princess Louisa Inlet. 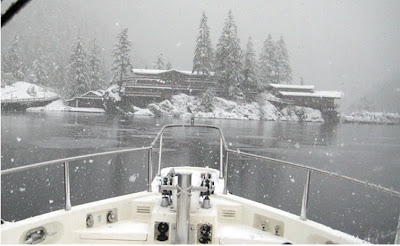 Wild Blue enters Malibu Rapids passing Malibu Club on the way into the Inlet.
This isn't our first Princess Louisa Inlet cruise, which is "as the crow flies" about 60 miles northwest of Vancouver and 90 miles by waterway. 8300-foot Mount Albert and other high peaks surround the Inlet, creating a fiord-like setting. We've enjoyed the Inlet many times in spring, summer and fall when it's sunny, warm, and clogged with numerous campers, kayakers, boats and yachts. However, this is our first winter visit. Some of us Californians get bored with warm sunny day, after warm sunny day. We need a climate change. We, too, need our dose of rain and snow, and Mother Nature has really dished it out over the Pacific Northwest this January! Our cruise started in Anacortes, Washington. After a lumpy night with 20-knot winds on the anchor in Echo Bay, Sucia Island we pushed on to Vancouver, BC, clearing customs in False Creek. Vancouver was under 1/2 foot of snow so boots and parkas were in style, and gloves kept our hands from freezing to the dock lines. After a couple days listening to the cautious BC Marine forecast calling for 25-knot winds along the Sunshine Coast, we instead paid attention to our rising barometer and enjoyed flat seas with 10-knot winds to Secret Cove. While there, proprietor Scott Rowland told us about his New Years Eve at Princess Louisa. He also said there's already been lots of snow this year which should make for an interesting cruise. 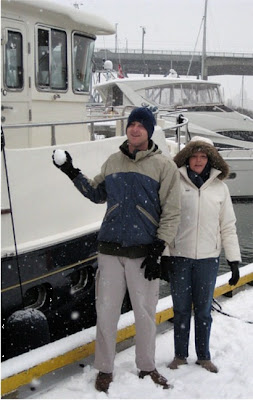 Snow greets Wild Blue crew at Vancouver Customs.
The January 6th forecast was for 30-knot winds as we exited Secret Cove in the dark with less than 10 knots breeze. At 8AM's first light we entered Agamemnon Channel with dying breeze and calm seas, which continued into Prince Of Wales Reach where it started to rain. The mountains and trees were covered in snow down to sea level, a pretty winter scene. The radar is showing the rain, and then about halfway up the Reach, a denser cloud appears on the display. From the pilothouse we see a massive white sheet....snowfall! The wind dies and beautiful fluffy stuff, big floating flakes, fall straight down, something we lowland Californians seldom see. We measure our visibility at just about 1/2 mile. The sea is pancake-flat, and then, irregular shaped pancakes appear on the surface as ice begins to form into slushy patches. 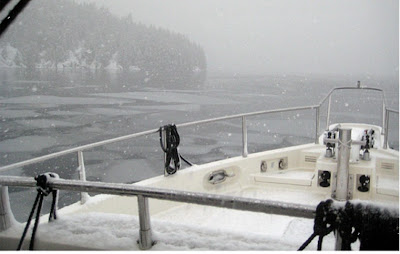 Patrick Point at 1/2 mile across patchy ice 5 miles from the Rapids.
At last we arrive at Malibu Rapids, past high slack tide, but with mild current. After our "Securite" radio call, we turn right, just in front of the Malibu Club, and cruise easily through the Rapids into Princess Louisa Inlet. 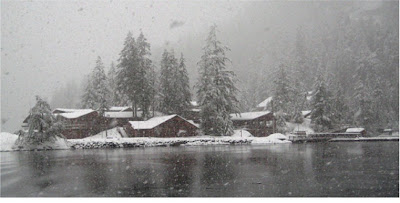 Malibu Club this winter.
The Malibu Club is a large Christian youth camping facility adjacent to the rapids. In 1938 Bill Boeing introduced Tom Hamilton, of the variable pitch propeller fame, to the beauty and splendor of the Princess Louisa Inlet. Mr. Hamilton purchased most of the land around the inlet and began building the Malibu Club. Malibu opened for business in 1945. Although originally designed as a luxury resort, in 1950 it was no longer turning a profit and was abandoned. It was later purchased by Young Life, which operates it today as a Christian youth camp. 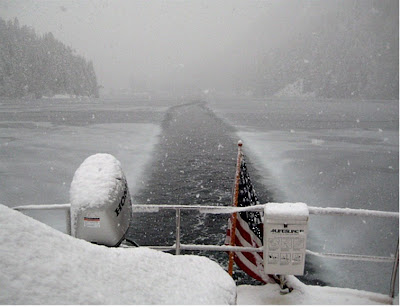 The surface turns from a "freshly blended" to a "frozen blended" margarita about 1/2 mile before the Chatterbox Falls.
It's a winter wonderland once inside Princess Louisa Inlet. Snow fills the trees and the rocks all along the near vertical sides of the inlet. The seawater temperature drops rapidly from the mid 40's to 36F near the Inlet head. And about halfway up the Inlet, the water surface looks just like --there's really no better description-- a freshly blended margarita. The grayish-white froth extends from rock wall to rock wall, and is unblemished, except for the occasional small opening, where a seal has poked his head through to take a look around. This slushy ice, about an inch thick, slows the boat a bit, but we keep pushing our way in. We watch as the pressure of the boat's forward motions create moving cracks in the froth as much as 100 feet in front of the bow. Just about 1/2 mile from the falls, our freshly blended margarita has been placed in the deep freeze for 10 minutes or so. The slush is thick and white, and the boat slows considerably as we noisily crunch our way forward. Just 100 yards from the dock we look back to see streaks of bright red on the white icy sides of our track. Oh my! Did we grind up a seal? 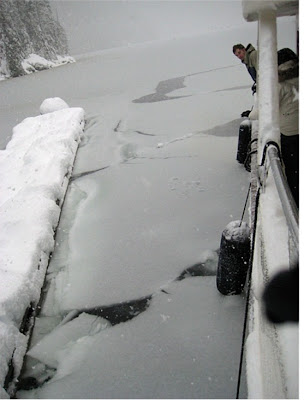 Crunching our way into the dock!
To our relief we realize it's just Wild Blue's red bottom paint being rubbed away by the harsh ice. Whew! We finally line up the boat parallel to the dock in front of the falls, backing and filling. When the boat is shifted to neutral, it stops: no continued motion like in open water. We do not use the thrusters, as we do not want to suck ice cubes through their propellers! Heck, there's already ample blended margarita froth. At last crew Ryan steps on the dock, laden with 2 feet of snow. Everything is quite stationary. There's no wind, waves or current. There's really no reason to tie off the boat, but habit prevails and our crew digs through the snow to find the bull rail, and threads a line back to the boat. 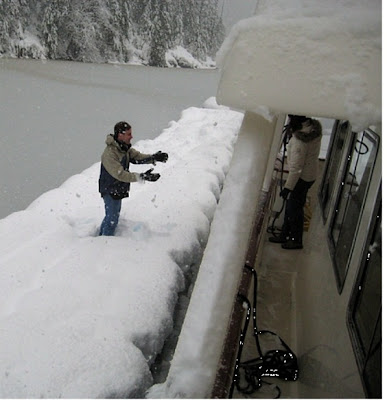 Ryan is ready for a dock line.
With the engine off, the Inlet is spooky-like quiet. There's not another boat around. Water is not lapping the dock. Chatterbox Falls is mute: its frozen surrounds limiting the fall's flow. Soundless snowfall is the only movement, white-on-white, a scene right out of the X-Files. Suddenly we startle from a loud BOOM high above! About twenty seconds later, just as our hearts restart, ice and debris fall into the Inlet off one of its shear walls. Looking closer we see freshly sheared tree limbs and a whole tree amongst the slide debris. A thought of small comfort: the dock is away from the steepest inlet walls. 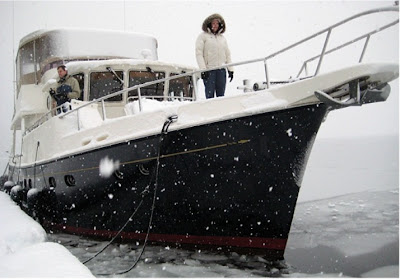 Docked at last with Pat doing her best Eskimo impression.
Just after lunch, and few BOOMS and slides later, we assess our situation. The dock is heavily laden with snow and although afloat, there's little free board remaining. It's now snowing heavily. The air is freezing, the wind is calm, the sea temp is 36F and the water is flat. 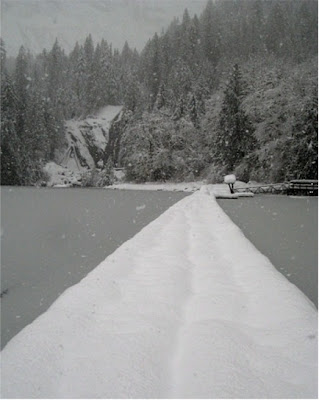 The falls and dock at Princess Louisa Inlet. 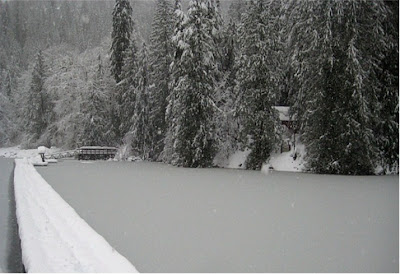 Another view of the dock and icy margarita froth covering the water.
Since there's a minimal tidal change over a long period this evening, there will be little water movement. It could get fairly cold, possibly hours of still, sub-freezing air. Now we're all thinking his name, but nobody really wants to voice it. Finally Pat utters: "Let's not be like...... Shackleton!" 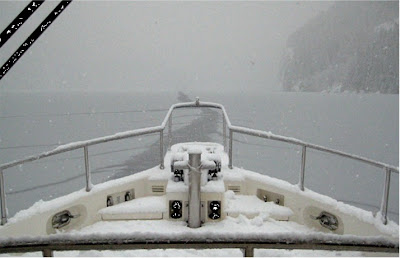 We retrace our path through the ice to the nearby MacDonald Island moorings.
So to avoid Wild Blue being frozen to the dock, and with daylight fading, we decide it's best to move to a mooring off MacDonald Island. The ice makes it a chore to turn the boat, but we do find it easiest to backtrack using our pre-cut inbound path. After 1-1/2 miles of slow going, we're back in the thinner, freshly-blended stuff, and connect to a mooring. For 12 hours, the boat remains perfectly still, swinging just a few inches. 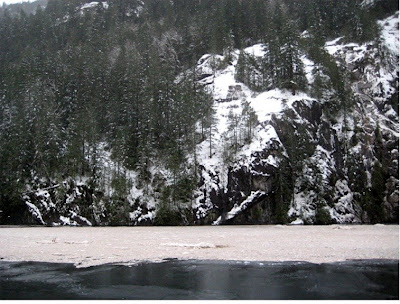 The results of an avalanche. Snow piles up on the ice while tree limbs and whole trees litter the debris field.
We sleep well and morning arrives with a BOOM, as another snow slide fills the Inlet. It's surprising that slide debris splashing down from high above, doesn't create a wave, and we're glad for that.

The sky is lightening. We've had our fill of the colder elements. It's time to head south. We've learned to appreciate those sunny California days. Even after all this talk about Margaritas, we're going to have our Tequila straight up. Happy New Year. 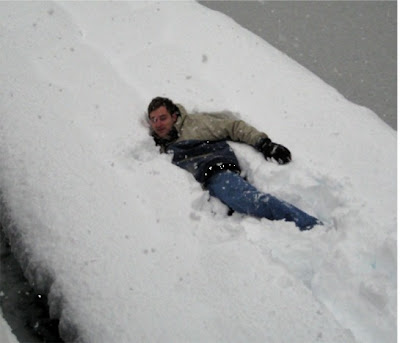 It's getting difficult to find good crew these days.
Posted by Alex Benson, Wild Blue at 6:38 PM No comments: